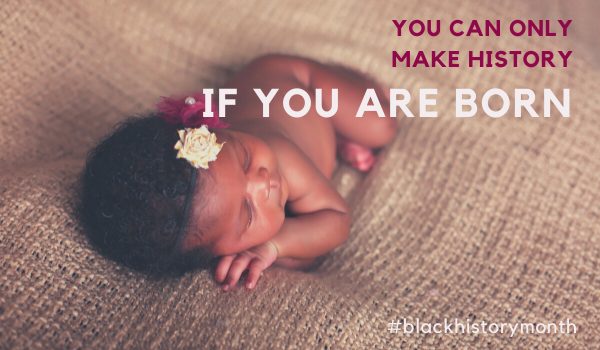 By Sharon Greenip, Director of Education and Training

February marks Black History Month.  We would be remiss if we did not acknowledge the millions of Black lives lost to abortion, as well as those great Black Americans who have fought for the unborn.

According to the Centers for Disease Control Abortion Surveillance Report (2018), the abortion rate (per 1000 women) among black people (25.1) was significantly higher than that of white people (6.8) in 2015.  In addition, even though Black Americans comprised only 13.4% of the U.S. population, they accounted for 36% of the abortions.

A 2018 Wall Street Journal (WSJ) Opinion page noted the “outsize toll that abortion has taken on the black population post-Roe.” In terms of New York City, thousands more black babies were aborted than born alive with the abortion rate among black mothers being more than three times higher than for white mothers.

The WSJ Opinion page goes on to say that “abortion deaths far exceed those via cancer, violent crime, heart disease, AIDS and accidents. Racism, poverty and lack of access to health care are the typical explanations for these disparities. But black women have much higher abortion rates even after you control for income. Moreover, other low-income ethnic minorities who experience discrimination, such as Hispanics, abort at rates much closer to white women than black women.”

These staggering statistics have a history.

Alveda King, (Director of Civil Rights for the Unborn and niece of Martin Luther King Jr.), Fannie Lou Hamer (civil rights activist), and even the young Reverend Jesse Jackson (who later entered the presidential race and became pro-abortion) are among those who have called abortion and the larger birth control movement “genocide.”  Ideas on human breeding flourished in the American eugenics movement and led to the founding of the American Birth Control League (later known as Planned Parenthood) by Margaret Sanger. Sanger’s colleague at the American Birth Control League, T. Lothrop Stoddard, referred to the “Asia peoples,” “American Indians and the American negroes” as “barbarian stocks” that needed to be excluded from America.

Sanger’s “Negro Project” sold the idea of population control in black communities. In as many as 30 states, even as late as the early 1970s, thousands of black females, including many teenagers, were sterilized by state-run “eugenics boards,” often without consent, if they were deemed feebleminded or incapable of raising children.

Walter B. Hoye II is a licensed and ordained Baptist preacher who serves as both President and Founder of the Issues4life Foundation.  In Decision magazine, the former California pastor says the solution, ultimately, is not in politics but in the church—and specifically in the pulpit. With years of sidewalk counseling experience, he says pregnant women in dire straits want to know three things: “Does God love me? Does God love my baby? Will you help me?”

The Pregnancy Clinic rejoices that we can be among those who answer “yes!” to these questions when it comes to women and families of all races.  We are thankful for the African Americans who have fought for the unborn—in their families, in their communities, and from the pulpit.  We also come together to remember those among the Black American community who have been lost to abortion.  Please pray for our ministry as we seek to bring love and life to those from every race background.

Never a time in our society and our local community so important than now to come alongside guys to be there to listen to their concerns & fears and provide them the assurance of God’s love and care about them and their role as a father in their pre-born child's life.
-- Scott K., Male Volunteer

I am SO blessed to be a part of this ministry. We have such brave clients, making choices for life in the midst of serious emotional chaos and cultural confusion.
-- Karen H., Counselor

Serving in this ministry is important because I am making a REAL difference in these women's (and baby's!) lives. I may be the last person standing between the choice of life or death.
-- Melissa S., Volunteer Counselor